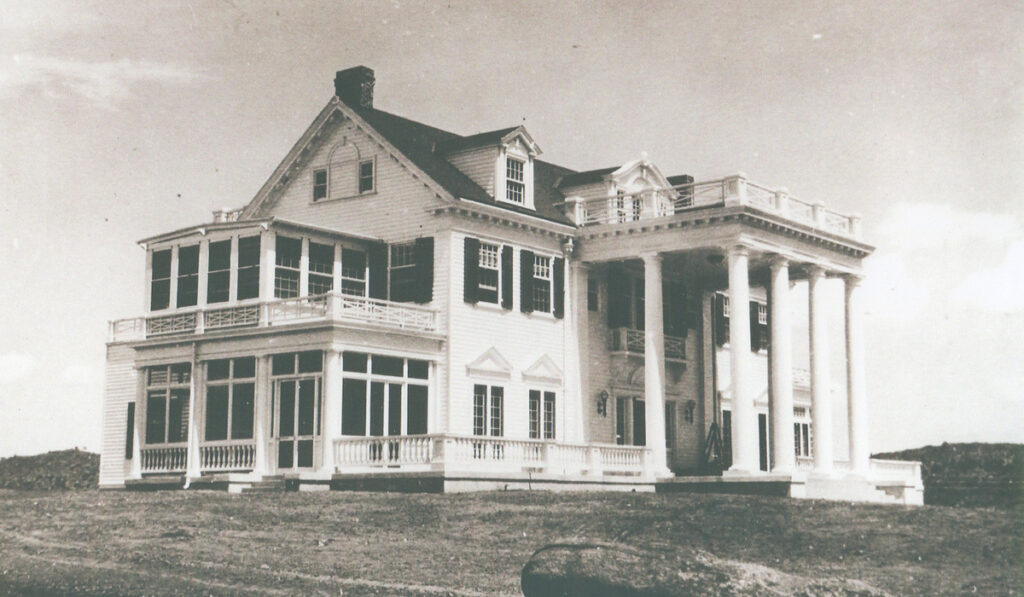 OCTOBER 17,1914 – John Charles Shaffer purchased the first 2,660 acres of what would become the Ken-Caryl Ranch for $100,000.  He and his wife, Virginia Conser Shaffer (1850 – 1932), named it Ken-Caryl after their sons, Kent and Carroll.  John Charles Shaffer (1852 – 1943) was born in Baltimore. He arrived in Chicago in 1874 where he worked as a grain commission trader. A few years later he purchased his first street railway company, in Richmond, Indiana. From there he purchased street car lines in Indianapolis and Chicago. In 1901 he purchased the Chicago Evening Post newspaper and from there went on to acquire a string of newspapers in the Midwest. After visiting his son, Kent, who was living in Denver, in 1913 Shaffer expanded his empire with the purchase of the Rocky Mountain News, the Denver Times, and the Denver Republican newspapers.

The Denver Times reported that “Mr. Shaffer gave instructions for the drawing of plans for a summer home modeled on the colonial style, to cost approximately $100,000. This building will be situated on the highest portion of the estate and is prophesied to become the nucleus of a colony of summer retreats for millionaires.” He immediately commissioned the architect Edbrooke, famous for his work on the Brown Palace, Oxford Hotel and many other prominent Denver buildings.

The Manor House included over 8,000 square feet of living area, with 20 rooms, six baths and a living room that was 80 feet long with mirrored fireplaces at each end. The dining room featured an enormous picture window overlooking a view so spectacular it was treated as a painting. Special draperies were designed to frame the view without obscuring it.

The Shaffers had friends in high places. Shaffer supported Theodore Roosevelt’s Bull Moose party, and was friends with presidents William Taft and Warren Harding. Indiana Senator Albert Beveridge was one of his closest and oldest friends. President Theodore Roosevelt was a luncheon guest at the Manor House on October 24, 1916. Shaffer’s relationship with Roosevelt was so close in 1917 that he carried a letter granting him immediate admittance to the president (this letter currently is on display in the lounge).  Presidents were not the only distinguished guests of The Manor House.  The Shaffers hosted other industrial chieftains, actors, musicians and other prominent figures from the era.

The 110 foot flagpole behind The Manor House has a light at the top that was originally battery operated.  The light could be seen from Denver through the saddle of the Dakota Hogback and when lit was an invitation to the social community to come join the Shaffers for a grand celebration.

style=”text-align: center;”>We are proud to continue this tradition of hosting special guests and memorable events at The Historic Manor House.

John C. Shaffer had two sons, Kent and Carroll, which is how this gorgeous valley came to be named Ken Caryl. John Shaffer decided to build The Manor House in the foothills of Colorado because his son Kent had health issues that the high altitude alleviated. We have recently updated the historic home and it is now available to be rented the night of your special event!

Frequent visitors to The Manor House and guests of Kent’s House included Presidents Theodore Roosevelt and William Howard Taft, Will Rogers the humorist, as well as stars of the Chicago Opera Company and the entire Denham Stock Company. The house is located directly adjacent to The Manor House and has three bedrooms, two bathrooms, an office, kitchen, and a large living area. It comfortably sleeps six people.

We very much look forward to your stay at Historic Kent’s Cottage.

all rights reserved — The Manor House © 2021 — Developed by Mr. WPress